Earwax lubricates, cleans, and protects the lining of the ear canal by repelling water, trapping dirt, and ensuring that insects, fungi, and bacteria do not get through and harm the eardrum.
Earwax, also known as cerumen, is a waxy, yellowish substance that is produced by the sebaceous gland within the ear. Cerumen can be found in a number of forms, ranging from liquid, through soft to hard earwax, depending on genetics as well as stress, fear and environmental and climate factors. 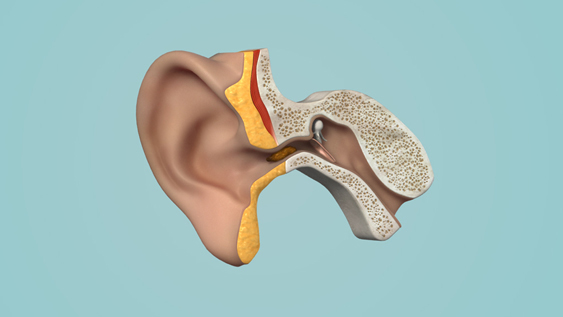 When Does Earwax Become a Problem?

The human body has a self-cleaning mechanism that utilizes jaw movements to drive excess ear wax through the ear canal and out of the ear. When this mechanism does not function as it should, there is a need for external intervention to routinely and properly remove the superfluous earwax.
Earwax clogging is more common in warm climates, and is intensified by frequent use of headsets and ear plugs, which prevent ventilation of the ear canal and stimulate earwax production.

Referred to as cerumen impaction, excessive accumulation of earwax can form a plug, and lead to a blocked ear. This widespread phenomenon is experienced by 57% of seniors, 33% of disabled people, 10% of children and 5% of healthy adults

What Medical Conditions Can Earwax Impaction Cause?

Cerumen impaction is the number one cause of various degrees of temporary, treatable hearing loss. Many people are often unaware of partial loss of hearing, which has a direct effect on quality of life, including productivity, frustration, behavioural changes, and even social withdrawal.
In some cases, impacted earwax can cause earache, and in rare cases tinnitus (ringing in the ear) dizziness, and vertigo (loss of balance).

People wearing hearing aids often complain of an increase in earwax. The reason is that hearing aids may stimulate the glands producing earwax. In fact, earwax blocks 60-80% of hearing aids’ filters, and might damage the microphone resulting in reduced efficacy of the device.
In addition, the hearing aids themselves, located in the ear canal, block the natural exit passage out of the ear of excess earwax.
Cerumen buildup can affect patients even before a hearing aid is fitted. Patients who need a hearing aid fitting and suffer from presence of earwax cannot have the device fitted on the spot. When the pathway to audiology is not completed as planned, there are a number of potential consequences: reduced patient compliance resulting in extended reduced hearing and losing contact with patients who do not return for the fitting. Thus, the objective of improved hearing is not always achieved.

The American Academy of Otolaryngology – Head and Neck Surgery recommend that if you are prone to repeated wax impaction or use hearing aids, you should carry out routine preventive cleaning. It is also important to maintain clean hearing aids.

Over recent decades – there have been no significant advances in treating impacted earwax.

The accepted practice is for healthcare professionals to refer patients to Ear, Nose and Throat Specialists, who are currently the only clinicians equipped to treat earwax blockages safely and effectively.

Some patients who undergo earwax removal with complex equipment by an Ear, Nose and Throat specialist, experience varying degrees of discomfort, depending on the extraction method and the physician’s experience.

At best, most of these are ineffective. At worst; they can cause severe clinical damage such as eardrum perforation. Some methods, such as using cotton swabs in the ear, have even been banned by official regulatory organisations, due to the danger.